The congregation in Grove was started about 1916 by families meeting for worship and Bible study in their homes.  There was no preacher unless a traveling evangelist came through.  Early families were:  James Allen and Amanda Newburn, Nathan Lankford, Will and Mollie Henson, Owen and Jennie Woods and the Andrew Killion family.

As the congregation grew, the meeting place became a rented building on 3rd Street.  In June 1926, the congregation applied for a building permit to construct a church building on the corner of 6th Street and Grand Avenue.  Most of the work was done by the members of the congregation.  Moving to Grove about this time were: John Wesley and Jennie Moore and family of Centralia, SC and Mattie Belle Jackson from McAlester, OK.  Brother Jackson taught the Bible class for many years.  Gospel meetings were held periodically by such men as Rue Porter of Neosho, MO, Curtis Porter and others.

When the church was completed, Alvin Teague, a lawyer, donated a bell for the small tower in the building.  His brother, Walter Teague, was an evangelist and the family had grown up in the Jay/Grove area.  The building was a small stucco building with a wood stove for heat with seating for about 50 people.  Many remember Brother Newburn trudging through the snow in the winter at time, but always coming early to build a fire in the stove and bringing the communion. 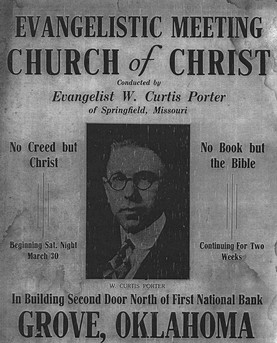 Herman and Elsie Moore were members of the congregation at this early time and Herman led singing.  Their son, Charles, and wife, Carolyn, were missionaries in Italy for many years, and Charles preached in Texas after returning to the States.  Their daughter, Wilma, married Robert Huffaker who became a preacher in Florence, AL.  Wilma had served as secretary to college presidents and authored a column, “Women to Women” in an Alabama Christian publication.

The Wyly Manos family moved to the area and the family was known as very good singers in the congregation.  Brother Manos taught and helped with the song leading while they were in the area.  Other members shortly following were Mrs. Holice Stewart, mother of Melba Moore, the John Brewster family from Whitewater, Bob and Fairy Connor family from the Dennis community, C.E. (Pete) Williams and Anna Williams and daughters, Martha (Adair) whose husband, Cullen, became a deacon in the congregation, and Myrene (Parker), whose husband, Jim, became an elder in the congregation.  Others new arrivals were Mary Dell (Buffington), Lucille Johnson, Elizabeth Martin, Bob and Betty Epperson, and Hugh and Louise Gabriel and family. 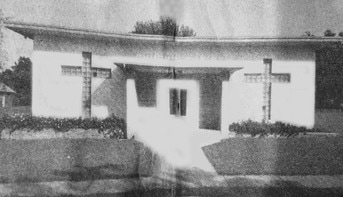 In 1950, the congregation’s full-time preacher was Brother G.R. Tinius of Tulsa.  Elders were chosen including Herman Moore, T.W. Pickett, and C.E. (Pete) Williams.  They served until the death of Brother Williams in 1958 and the moving of R.W. Pickett to Seminole, OK.  Following Brother Tinius, teachers from Central Christian College at Bartlesville, OK filled in the pulpit for a number of years.  Stafford North, Joe Spaulding and others alternated preaching.  Our next full-time preacher was Lavern Stewart, followed by Delmar Andrews and Frank Kilbourne.  Fred Webb came in 1957 and a new building was built in the 1000-block of South Grand Avenue in Grove.  The congregation moved into the new building in January 1961.  R.W. and Evelyn Pickett had moved to the area a little earlier.  Brother Pickett was a builder and brick mason and was the overseer of the new building project.  Other members, including our high school-age boys, worked on the building project as well.  Bob Cosby was our next preacher and Elizabeth Berry became the church secretary and served in this capacity until her health would not allow her to do so.  She was a serious student of the Bible and had a sizeable library which was given to the congregation by her nieces after her death.

David Sherlock, Frank Williams, Vern Leckliter, Kenneth Manscur, Elmer Shackleford, David Boivie, Nolan Kennedy, Bert Fulmer, and Tom Adams served as ministers, in that order.  Bob Kirkley came in August 1987 and served as minister until May 1994.  Otho Rogers followed him and Doug Rainbolt followed Otho Rogers and was our minister until 2017.  Ryan Beavers became our minister on the 1st of April, 2018. 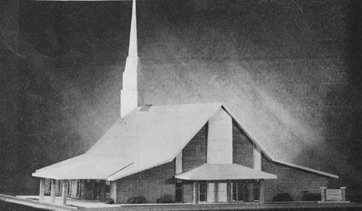 A site for a new building was purchased north of the existing church building.  Membership at that time was approximately 115.  Jim Parker, Ray Libby, Gerster Lentz and Alvin Hobby (former missionary in Africa) served the Grove congregation as elders.  Ray Libby, Dean Tomison and Jim Ford served later as elders.

Grove is a popular destination and resort area because of Grand Lake o’ the Cherokees and we have many visitors throughout the year, especially during the spring and summer months.

Our mission work has varied throughout the years including tuition help for students in preaching schools, the Disaster Relief Fund in Nashville, TN; Hope Harbor (home for troubled teens and prison halfway house) in Claremore, OK; Northeastern Oklahoma Correctional Custody prison ministry in Vinita, OK, (over 55 prisoners have been converted in the past 8 years); and prison ministry in southern Oklahoma.